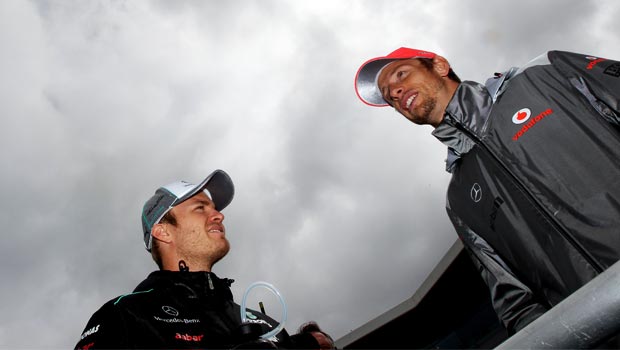 Jenson Button believes Mercedes will not favour either of their drivers this season and has backed Nico Rosberg to overcome any mind games played by Lewis Hamilton.

Mercedes are taking the 2014 Formula One season by storm, with both of their drivers sitting top of the drivers’ standings after five races.

Hamilton has won the last four races in a row and now sits top of the leaderboard, three points above his team-mate Rosberg in second place.

Rosberg won the season-opening race in Melbourne and has been the closest competitor to Hamilton in the last four races, finishing second on each occasion.

While Hamilton appears to be running away with the drivers’ championship, Button insists Mercedes will keep a level playing field within the team.

“The thing is with that team is because they are going to walk away with it – I know we are only five races in, but they have such a big lead – they’re not going to favour just one driver,” Button told BT Sport.

“So there is no point trying to get the team behind you because they won’t. I think they will be very fair, and they need to be for the sport.”

Button also backed Rosberg to overcome any ‘mind games’ Hamilton will play on him during their time at Mercedes.

Button, the 2009 champion, claims his former team-mate played the same tricks on him at McLaren but says Rosberg is too clever to fall for them.

“I am sure there will – if there aren’t already – be mind games going on. There were a few things he played on me,” Button, who partnered Hamilton at McLaren, told BT Sport.

“Nico is intelligent to know if Lewis is playing mind games or not, which in some ways could help Nico or harm him. He might just end up getting fed up with it.”