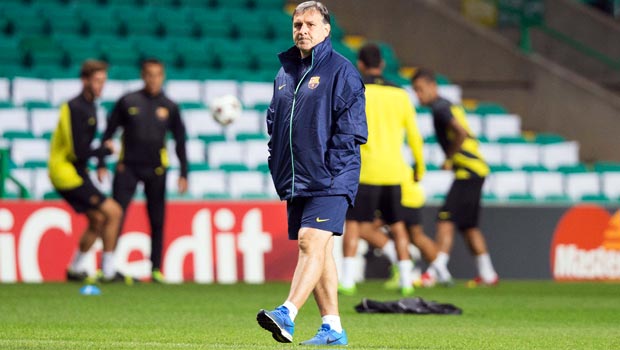 Barcelona coach Gerardo Martino is to step down from his role after failing to win the La Liga title on Saturday.

Barcelona needed to beat Atletico Madrid in the season finale at Camp Nou but could only manage a 1-1 draw; handing the title to their opponents from the Spanish capital.

It means the Catalan giants have finished the season without a major trophy for the first time in six years.

And Martino, who took over from Tito Vilanova on a two-year deal last summer, has now confirmed he will leave the club.

“I want to confirm that I have reached an agreement to end my association with Barcelona,” the Argentine said.

“We did not achieve the objectives that this club is used to; objectives which have been hit year after year.

“We tried until the end, but met a rival better than us. I would like to congratulate Atletico Madrid on their success.”

He added: “I’m sorry I was unable to deliver. I’d like to thank the club for their confidence in me.”

Former Barcelona midfielder Luis Enrique has been widely tipped to take over from Martino after confirming he will leave Celta Vigo at the end of the season.

The Spaniard led Celta to a ninth-place finish in La Liga and has been praised for his side’s attractive football.

Enrique led Barcelona’s B team for three years after taking over from Pep Guardiola in 2008 before a difficult spell in charge of Roma and his arrival at Camp Nou looks imminent.

“The time has come to announce that I am not staying in Vigo next season,” he said.

“Believe it or not, but right now, I don’t know which team I will be coaching next season.”