Hamilton favourite for Brazil GP as Vettel poised for title 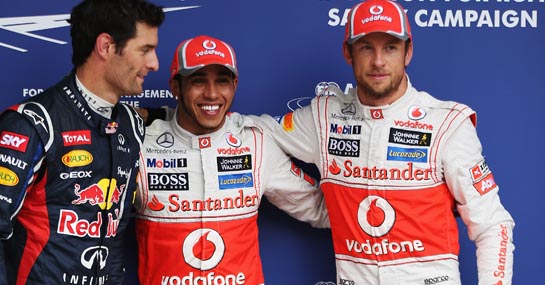 Lewis Hamilton has been installed as the 5/4 favourite to win the Brazilian grand prix after qualifying in pole position.

Hamilton followed his victory in America with another brilliant drive that saw him post a time of 12.458secs, edging out teammate Jenson Button into second by 0.055secs.

Button has been priced at 4/1 to claim a victory in South America.

Speaking after his drive, Hamilton said: “It’s been a good weekend so far. I am grateful to be able to put the car on the front row and to have had my last qualifying with McLaren as a one-two.

“It’s a fantastic job by the team and I hope we can turn it into something positive tomorrow.”

He’s now 1/5 to win the title for a third year in succession with his only challenger, Fernando Alonso, down the grid in eighth place.

Alonso must finish on the podium to have even the slightest chance of getting his hands on the championship and even then it needs a dreadful performance from Vettel in the Red Bull.

Minor miracles can happen though – especially as plenty of rain is forecast for tomorrow’s grand prix at Interlagos – and if you can see something special happening, then Alonso can be backed at 7/2 to claim his third championship.