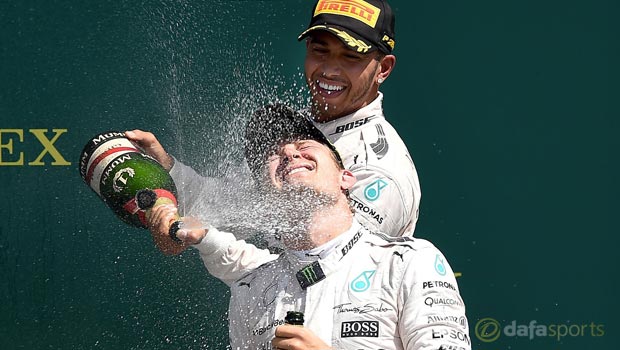 Lewis Hamilton overcame a tricky time in the first two stages of qualification for the Sunday’s British Grand Prix to take pole position for the eighth time this season.

The defending champion was off the pace in Friday’s practice sessions and the performances were not much better early on Saturday.

The Mercedes star was fourth in Q1 and could only improve by one place in the next stage as team-mate Nico Rosberg looked on course for pole.

It was Hamilton who produced the goods when needed though and the Brit, who leads the Drivers’ Championship by 10 points, clocked the fastest time of 1:32.248 and now sits in prime position to record a second consecutive victory at Silverstone.

The 30-year-old came from sixth position on the grid last season to win on home soil and a 46th career pole on Saturday means a repeat success is firmly on the cards.

Recent Austria winner Rosberg had to settle for second on the grid after complaining about a lack of grip on his left tyre following the completion of the qualification stage.

It was a good day for Williams with Brazilian Felipe Massa and the highly-rated Valtteri Bottas ending up third and fourth on the grid respectively after out-qualifying the Ferraris.

Kimi Raikkonen will start Sunday’s race in fifth while team-mate Sebastian Vettel, the only driver to win a Grand Prix aside from the Mercedes duo this year, is in sixth.

Red Bull’s Daniil Kvyat managed to move into seventh on the grid, Carlos Sainz will be eighth for Toro Rosso while Nico Hülkenberg and Daniel Ricciardo make up the top-10 for Force India and Red Bull respectively.

It was another poor outing for McLaren with Fernando Alonso and Jenson Button both knocked out at the first qualifying stage while Lotus had their problems as well, the latter losing both their drivers in the Q2.