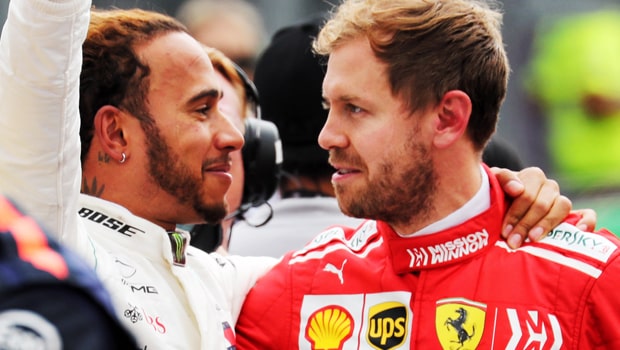 Mercedes’ Lewis Hamilton has claimed Ferrari’s Sebastian Vettel will still be his biggest rival in 2019 after he signed off in style by winning the Abu Dhabi Grand Prix.

The Brit has enjoyed a thrilling end to the 2018 campaign, as he capped off the year by winning his fifth world championship.

Hamilton cruised home during Sunday’s race and he took his tally for the year to 11 victories.

The former McLaren man finished the year on 408 points and he is already thinking about the 2019 campaign. Both Ferrari and Red Bull have pushed Mercedes this year but Hamilton believes it will be the Scuderia and Vettel in particular that will get the nearest to them.

“I really wanted to finish the season strongly,” said Hamilton.

“I wanted to end how l plan to start next year – that was the new psyche.

“I imagine it would be Sebastian and Valtteri alongside me. “Red Bull have got a great car, they have been very strong at the end of the year.

They will have a new engine next year. Will they be able to compete with us? I hope so. That would be epic if they could mingle with us weekend-in, weekend-out. But they have to work on their reliability. But l wish them all the best.

“We are ready for the competition.” Hamilton celebrated his latest success by performing donuts at the finish line, with Vettel second and team-mate Valtteri Bottas in fifth.

Red Bull’s Max Verstappen and Daniel Ricciardo took third and fourth and both men will be determined to win their first world titles in 2019.

Hamilton remains 1.75 favourite to retain his crown, while Vettel is 4.00 second favourite.