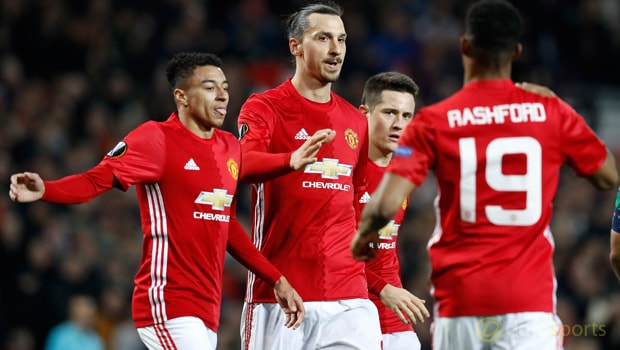 Zlatan Ibrahimovic has silverware in his sights after his first Manchester United hat-trick helped the Red Devils secure a 3-0 victory over Saint-Etienne in the first leg of their Europa League last-32 tie on Thursday.

The charismatic Swede has now scored 23 goals in all competitions since joining United on a free transfer during the summer, with his strikes helping the club remain competitive in four competitions.

Jose Mourinho’s men have already won the Community Shield this term, while they will face Southampton in the final of the EFL Cup later this month and Blackburn in the fifth round of the FA Cup on Sunday.

United are also well positioned to challenge for a top-four finish in the Premier League, although a title tilt looks unlikely, and with things going so well in Europe, Ibrahimovic is convinced his side can taste glory in more than one competition this season.

The 35-year-old said: “If you look at the Premier League, the first four who go into the Champions League, one will become a champion and the rest maybe will not win a trophy.

“We’re still in all four. The fifth, the Community Shield, we’ve already won. If we don’t win the Premier League, we get some other trophies. That’s good, also.”

Despite his confidence, Ibrahimovic knows his side are not yet assured of a place in the last 16 of the Europa League, as he is expecting a tough battle during the return leg at the Stade Geoffroy-Guichard on Wednesday.

He added: “It’s a good result because I know how difficult it is to play over there. They have a fantastic crowd.

It was important to get a good result.” United are currently priced at 4.33 to win the Europa League this season, as they go in search of their first major European title since their success in the Champions League in 2008.