No excuses from Arsene Wenger 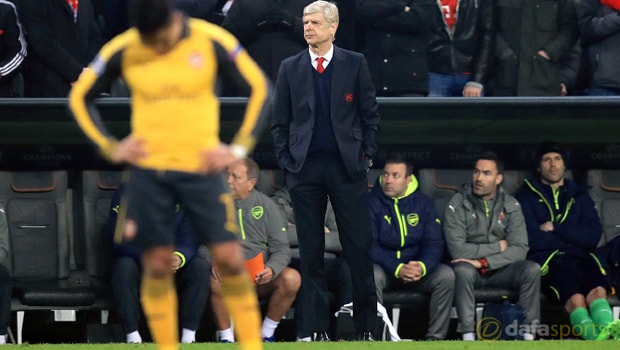 Arsene Wenger says there can be “no excuses” for Arsenal’s second half collapse in their 5-1 loss at Bayern Munich on Wednesday.

The German giants struck first in the Champions League last-16 clash as Arjen Robben opened the scoring. Arsenal hit back through Alexis Sanchez and the sides were level at 1-1 at the break but the Gunners imploded after the restart.

Centre-half Laurent Koscielny was forced off on in the early stages of the second period and within 15 minutes the Premier League side were 4-1 behind as Robert Lewandoswki and Thiago Alcantara, twice, found the back of the net for the Bavarians.

Substitute Thomas Muller also struck for Bayern late on and Arsenal face a mammoth task in the second leg at the Emirates Stadium if they are to continue in Europe this season.

Wenger was left deflated by the manner of the defeat and was at a loss to explain his side’s performance. “It’s difficult to explain,” he told BT Sport.

“Just before half-time we had two good chances to score. We came back and played well.

In the second half we lost Koscielny very quickly – he came off at 1-1 – and finally we collapsed. “It’s difficult when we collapsed – and Bayern were the better team as well.

I felt the third goal was a killer for our players because after that we had no response.

“The real problems were after the third goal. We lost our organisation and we looked mentally jaded and vulnerable from that moment onwards. The last 25 minutes was a nightmare for us.”

He added: “The two goals (second and third) were difficult to swallow – 53 and 56 minutes. “We have to analyse that. It looked like we lost our organisation.

Not only did we lose our centre-back, but a combination of mentality and organisation. Before that, we controlled them quite well.”

The Gunners trip to Sutton in the FA Cup on Monday now has added significance as the competition is potentially their only chance to land any silverware this season, with Arsenal 5.50 to win the FA Cup outright.