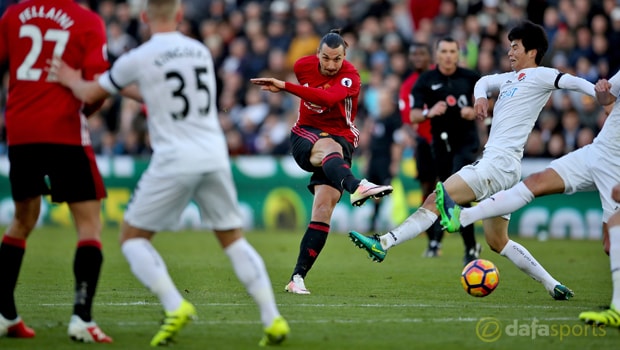 Zlatan Ibrahimovic insists he is pleased by his overall performance levels since joining Manchester United, but he is keen to make further improvements over the coming months.

The charismatic Swede moved to Old Trafford on a free transfer from Paris Saint-Germain during the summer and he made an impressive start to life in the Premier League, scoring four goals in his first four appearances.

The 35-year-old struggled to maintain that strong start however, failing to find the back of the net in any of his next six league matches, although he did return to goalscoring ways by converting a brace during Sunday’s 3-1 victory at Swansea.

The former Sweden international has now conceded that English football is different to other countries he has played in, and he has found it a challenge to adapt to the ‘back and fourth’ style.

That’s the way the game is, you have to get used to it.” The former Barcelona and AC Milan forward has been pleased by his overall performance levels however, and he is now hoping both he and the club can do more during the rest of the season.

United are next in action when they play host to Arsenal after the international break, and they are priced at 2.63 to win that match, while the Gunners are available at 2.70 and the draw is on offer at 3.10.