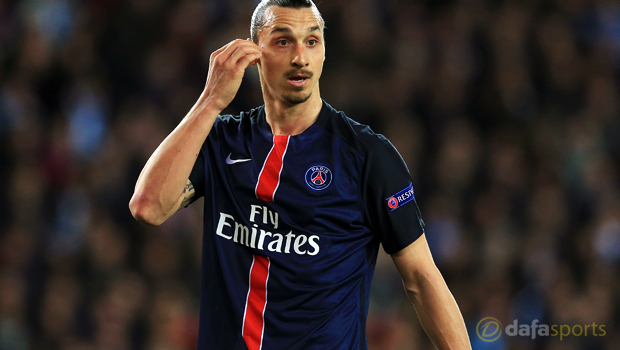 Zlatan Ibrahimovic said he “came like a king…left like a legend” when announcing he will leave Ligue 1 champions Paris Saint-Germain at the end of the season.

The 34-year-old talisman revealed on social media on Friday he will play his last game at Parc des Princes on Saturday when Laurent Blanc’s men end their title-winning campaign against Nantes, while his final game for the Paris giants will be against Marseille in the Coupe de France final on May 21.

Ibrahimovic, revealed by Forbes this week as the world’s third-highest earning footballer, has scored 36 goals in the French top-flight so far this season.

He joined the club from AC Milan in 2012 and is a four-time Ligue 1 title-winner, while he has also won the Coupe de France as well as the Coupe de la Ligue and French Super Cup on three occasions each.

However, Champions League glory eluded the maverick striker again this season as Blanc’s men were beaten by Manchester City in the quarter-finals.

Manchester United, former clubs Inter and AC Milan and MLS outfit LA Galaxy have been credited with an interest in the veteran.

Ibrahimovic won three Serie A titles with Inter before leaving for Barcelona in 2009, but coach Roberto Mancini said he could not guarantee his former striker would return to the Stadio Giuseppe Meazza. “Ibrahimovic has put together an extraordinary season,”he told a news conference on Friday.

“It is strange that PSG let him get away. He’s a player who can change games and is very strong.

“I don’t know where he will go.” Ibrahimovic’s Sweden are currently priced 1.67 to qualify from Group E at Euro 2016 this summer and the striker is quoted 26.00 by Dafabet to end the competition as the top goalscorer.