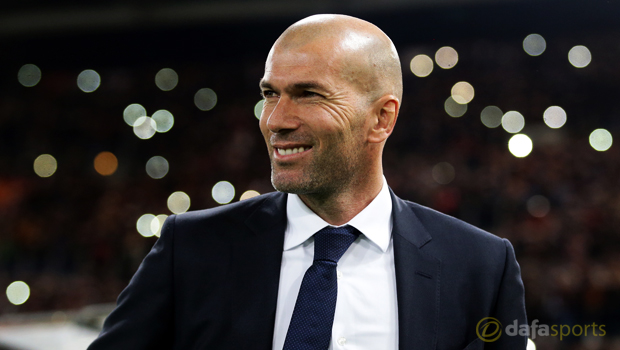 Zinedine Zidane says Real Madrid must be prepared to remain patient in their bid to overturn a two-goal Champions League deficit against Wolfsburg at the Bernabeu.

Madrid slumped to a 2-0 defeat in Germany last week despite making a decent start in the Volkswagen Arena.

The Spanish side were in control early on but suffered a sucker punch when Ricardo Rodriguez netted from the penalty spot on 18 minutes.

Maxi Arnold doubled the Bundesliga side’s lead shortly after and, on a rare off night, Real Madrid were unable to force a way back into the game.

Zidane remains confident that his team can turn the tie around in the Spanish capital but has warned his players they might need to bide their time.

“This is a big match, but you need a cool head to play in it. We are not going to win it in [the first] 10 or 15 minutes,” Zidane told the UEFA website.

“It could be more difficult if they score, but that can happen. We must be focused from minute one. We have to score, but we have 90 minutes to do so. We need to be patient.”

The Frenchman was also keen to try and forewarn the Madrid supporters that a gung-ho approach will not work.

“People want to see their team play well and I’m sure we are going to do that. The first-leg result makes it more complicated, but also more exciting,” he added.

“We love our fans because we know how important they are, especially in our stadium. We want them to support us from minute one until the end.”