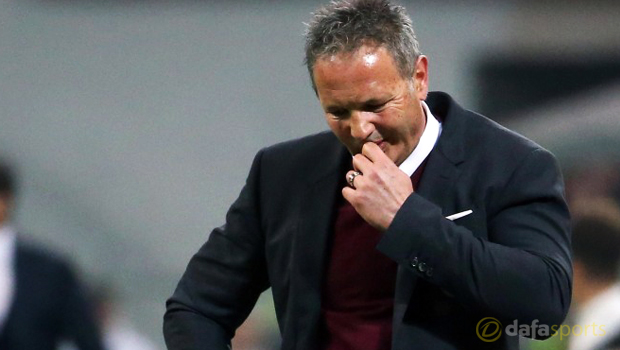 AC Milan have wielded the axe on boss Sinisa Mihajlovic after less than a year in charge at the San Siro.

Milan president Silvio Berlusconi had recently suggested that Mihajlovic would be given until the end of the season to prove himself but a run of five Serie A games without a win has proved fatal.

AC Milan slipped to a 2-1 home defeat against Juventus over the weekend, leaving their hopes of European football next season in the balance.

The Rossoneri have not played in Europe for the last two seasons and the club are eager to secure their return this term. While Berlusconi appeared set to allow Mihajlovic remain at the helm and take charge of next month’s Coppa Italia Final against Juventus, the club have now confirmed a change of plan.

“Sinisa Mihajlovic has been relieved of his role as AC Milan coach. The club would like to thank Mihajlovic for the dedication and hard work carried out this season,” read a club statement.

“Cristian Brocchi will now be in charge of the first team until the end of the season. AC Milan would like to welcome Mr Brocchi and wish him all the best.”

Brocchi, 40, had previously been in charge of Milan’s youth team and was in the frame last summer to replace Filippo Inzaghi before Serbian Mihajlovic was summoned to the post.

The powers that be at the San Siro are fully aware that clinging on to sixth place in Serie A could prove defining in their quest for European football next season.

Should Milan fail to win the Coppa Italia, the sixth placed team in the league will enter the Europa League, while they would also achieve that placing should they overcome Juventus on May 21st.

Milan are currently one-point ahead of Sassuolo in seventh while Lazio are just three points further behind after their weekend success against Palermo.

Brocchi will take charge for the first time on Sunday when AC Milan visit Sampdoria, a game the visitors are 2.40 to win. Sampdoria are 3.00 while the draw is 3.20.