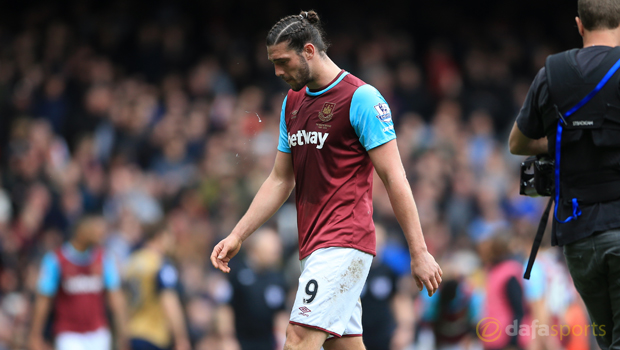 Louis van Gaal feels Manchester United’s dreams of FA Cup glory will go up in smoke if they do not manage the threat posed by West Ham striker Andy Carroll.

The Red Devils face a quarter-final replay against the Hammers on Wednesday after playing out a 1-1 draw at Old Trafford last month.

United needed a late leveller from Anthony Martial to cancel out Dimitri Payet’s stunning free-kick on that occasion and Van Gaal has highlighted Carroll as a primary threat this time around.

The big frontman was in devastating form on Saturday, netting a hat-trick in less than 10 minutes against Arsenal.

West Ham boss Slaven Bilic has been calling for Carroll to receive a recall to the England squad ahead of Euro 2016 given his form and Van Gaal feels his team must prove they can handle his power.

However, the Dutchman admits there are problems in the centre of his defence in the wake of Sunday’s defeat to Spurs at White Hart Lane.

“I’ve seen the Andy Carroll show [against Arsenal] and I think our problem against Tottenham was also the miscommunication of our central defenders,” the United boss said.

“I hope that we improve our communication because it is very important this game for us.

“Carroll has special qualities. We have seen that in the match that he played on Saturday.”

Carroll has been out of favour with England after a string of injury setbacks but was part of Roy Hodgson’s previous European Championship squad in 2012 and scored in the group stage win over Sweden.

The 27-year-old admitted after his performance against Arsenal that he still harbours hopes of making the cut with the Three Lions for this summer’s tournament in France.

West Ham have not lost at home since August and Van Gaal says they have plenty other threats to back up Carroll.

“We have to cope with Andy Carroll and not only Andy Carroll, the other players,” he added.

“They have a certain player called Dimitri Payet for example, he can also play, and [Manuel] Lanzini can also score goals.”