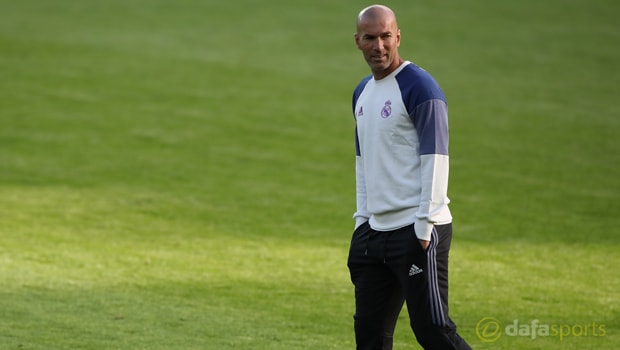 Real Madrid boss Zinedine Zidane admits his side must improve if they are to claim the La Liga title after Wednesday’s draw with Las Palmas at the Bernabeu.

Los Blancos appeared to be heading for a routine win after Isco struck the opener on eight minutes, but the visitors soon levelled through Dominguez Tanausu.

Gareth Bale was then dismissed for Real just after half-time and the hosts were 3-1 down within 13 minutes after quick-fire goals from Jonathan Viera and Kevin-Prince Boateng.

It appeared as if Zidane’s title chasers were heading for a rare home defeat before the 10-men of Real fought back to claim a draw, with Cristiano Ronaldo on target twice in the final five minutes of normal time.

Real have now managed just four points from the last nine available and the Madrid giants have been replaced at the top of the table by Barcelona.

Los Blancos do have a game in hand and only trail Barca by one point so they still hold the advantage, but Zidane is well aware results must improve quickly if they are to claim the La Liga crown for the first time since the 2011/2012 campaign.

“We can’t look for excuses,” said Zidane. “What we can do is improve our performance. We are not happy with how we are playing. “There are moments in the season like this.

The past three or four games things haven’t gone as we would want, but we are not going to look for excuses in the referees.

“There are things we have done well this year, but we have to analyse it and we will change things.

“We have shown we have character and we can do more. We have to improve, particularly in our first-half performances. We have to think about the positives.

We will analyse the negatives but to come back from 1-3 to 3-3 is a huge effort.” Real are back in la Liga action on Saturday when they travel to Eibar.