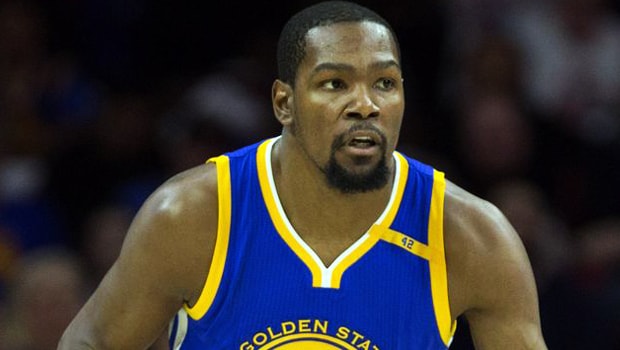 Golden State Warriors begin life without Kevin Durant at Chicago on Thursday evening although there is hope he could return before the end of the regular season.

Durant initially struggled after joining last season’s beaten NBA finalists but has since become a star man in their talented side.

The 28-year-old sustained a knee injury in the defeat at Washington last time out and initially there were fears his season could be over.

However, scans have now confirmed the eight-time All-Star has suffered a grade 2 sprain of his medial collateral ligament on his left knee, along with a bone bruise, rather than a serious injury.

There is a good chance Durant will be ready to make a return in around a month, meaning he could be back on the court before the regular season ends on April 12.

If the injury takes longer to heal, the former Oklahoma City Thunder star is likely to be back for the first round of the play-offs.

The Warriors head to Chicago Bulls next in what should be a test of their Championship credentials.

Admittedly, the Bulls are unlikely to be their rivals in the Finals Series should Golden State get that far, but Chicago have picked up some big results of late including a 117-99 success at champions Cleveland Cavaliers last weekend.

Golden State are 1.91 to come out on top at the United Center with a -7.5 handicap and the Bulls are 3.60 in the match result market.