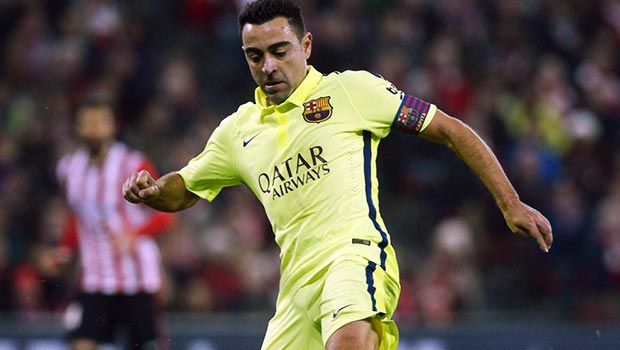 Barcelona veteran midfielder Xavi Hernandez insists it was crucial for the side to take advantage of Real Madrid’s slip-up this weekend with victory over Athletic Bilbao.

The Catalan outfit, who are priced at 6.50 to win the Champions League, travelled to the Basque country knowing that if they could claim a win it would move them to within one point of the league leaders.

Los Blancos crashed to a 4-0 defeat at the Vicente Calderon against local rivals Atletico on Saturday, leaving Barca with a prime opportunity to bridge the gap.

Luis Enrique’s side were looking to banish the memory of their last trip to the Basque region of the country when they had the chance to close the gap on Real, but were beaten 1-0 by Real Sociedad.

Since that defeat in early January, Barca have won nine on the bounce in all competitions with the latest coming as they blew away Bilbao.

Lionel Messi, Luis Suarez, Neymar and Pedro Rodriguez all netted, while Oscar De Marcos fired into his own net to seal a 5-2 victory for the Blaugrana.

Xavi, who was handed a rare start, stressed the importance of claiming all three points as they look to put further pressure on the European champions.

Xavi said: “I think we played a great game. We are in very good shape and we had to take advantage.

“We didn’t take our chance at Anoeta but today I think the team has used it well. We were comfortable on the pitch and we enjoyed ourselves.”

However, the midfielder refused to label his side as favourites to claim the title despite the fact that they still have to host Carlo Ancelotti’s side at the Nou Camp later this term.

He added: “Favourites? Not at all. There’s a long time to go and now the feelings are good from inside, it shows we have worked well and we’re going from low to high. But we have to take advantage.”