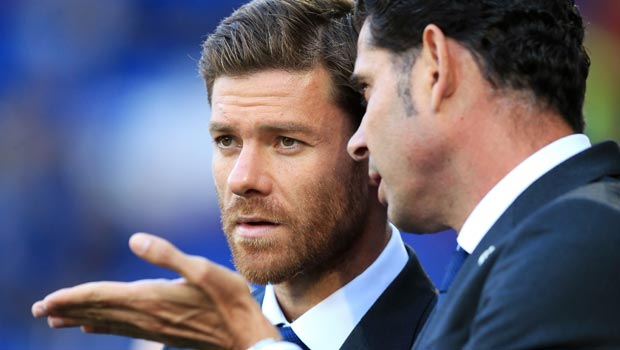 Xabi Alonso has completed a reported £5million move to Bayern Munich from Real Madrid, bringing down the curtain on a successful five-year stint at the Bernabeu.

German champions Bayern have moved quickly to complete a shock deal for the 32-year-old midfielder, who is the second new arrival this week following the capture of Moroccan defender Mehdi Benatia from Roma.

Alonso’s move to the Bundesliga comes as something of a surprise as the former Liverpool man had only agreed a two-year extension to his Real contract earlier this year.

However, he has opted to leave the Spanish capital having slipped down the Los Blancos pecking order, with Toni Kroos having usurped him in coach Carlo Ancelotti’s starting XI.

While he may no longer have been a first-team regular in Spain, Alonso looks set to get plenty of game time initially with Bayern.

The Bavarians are without three central midfielders due to injury, with Thiago Alcantara and Javi Martinez currently sidelined with long-term problems. Bastian Schweinsteiger is also struggling for fitness having been plagued by a knee injury since the World Cup.

Alonso says he jumped at the chance to help out Bayern and is delighted to have moved to another big club.

Alonso said: “When Bayern are interested in you then you must not hesitate for a single second. I am looking forward to what lies ahead. I am proud at my age to have another chance to play for such a great club.”

Alonso may have to wait to make his debut for Bayern, with manager Pep Guardiola unlikely to throw him in to his squad for Saturday’s clash with Schalke.

Bayern, who began their Bundesliga title defence with a 2-0 win over Wolfsburg last week, are 1.46 to make it back-to-back wins, with Schalke 6.60 and the draw 4.28.