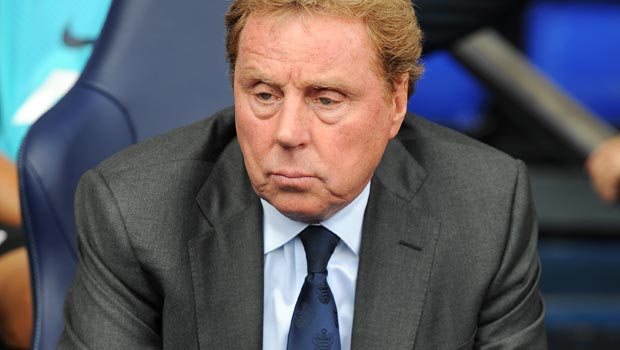 Queens Park Rangers boss Harry Redknapp has confirmed he has been offered a two-year contract extension by the club and says he is poised to sign the deal.

The 67-year-old has been in charge at Loftus Road since November 2012, failing to save them from relegation from the Premier League initially before helping the Hoops bounce straight back the following year.

The west London outfit have made a poor start to life back in the top flight, losing to Hull City and Tottenham in their opening two matches.

Those defeats were followed by an embarrassing Capital One Cup second-round exit at the hands of League Two Burton Albion.
QPR’s losing start to the season triggered reports that Redknapp’s future at Loftus Road was in some doubt, with chairman Tony Fernandes considering his options.

The former Tottenham and Portsmouth boss has now rubbished speculation he is in danger of getting the sack and says he expects to commit his future to the club soon.

“Tony’s offered me an extension for two years and I’ll sign it,” he said. “I haven’t read it, I probably won’t read it, I’ll just sign it.

“He’s been asking me for a little while but we’ve just not got around to doing it. Maybe today if they put it in front of me, I’ll sign it. If not, next week.”

Despite a slow start Redknapp is confident he can keep QPR in the Premier League this season, although not without some additions to his current squad.

“I wanted to come back into the Premier League, I want to stay here and I will stay here this year – we’ll stay up,” he added.

QPR are 2.38 to pick up their first win of the season against Sunderland on Saturday, with the unbeaten Black Cats 3.09 and the draw 3.07.