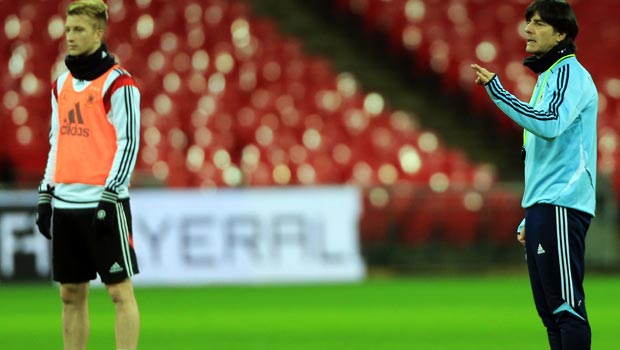 Germany coach Joachim Low will blood some young players when his team faces Poland in a World Cup warm-up match on Tuesday.

Low is without a number of senior players who were not called up because they are due to play in the German Cup Final at the weekend.

Low will cut several players from his preliminary 30-man World Cup squad after the match and the trimmed group will travel to a training camp in Italy where he will announce his final 23.

Poland, which has not qualified for the World Cup, will be without striker Robert Lewandowski – the recently-crowned Bundesliga top scorer who switches from Borussia to Bayern this summer.

Only 10 of the 30 players named in Germany’s preliminary World Cup squad are available for the friendly in Hamburg with veteran striker Miroslav Klose the only experienced forward.

Hoffenheim’s Kevin Volland, who is uncapped, is likely to make his debut against Poland and this could be his chance to secure a ticket to Brazil.

“I feel very comfortable in the position of central striker, I am robust, but I can also hold the ball and pass,” said Volland, who scored 11 goals in the Bundesliga. “But I am versatile, I can also play in other positions.”

Sami Khedira made his return over the weekend, starting his first match after sitting out six months with a knee injury, and Germany assistant Hans-Dieter Flick said the Real Madrid midfielder’s comeback was “on schedule”.

“Hopefully he will play next weekend, too, and maybe in the Champions League as well,” Flick said.

However, Bastian Schweinsteiger limped off in Bayern Munich’s final match of the season and has been diagnosed with a knee irritation.

The midfielder could be doubtful for the cup final but Flick was optimistic about his chances of going to Brazil.

“It doesn’t look that bad. I think he will be able to play,” Flick said. “We are in touch with Bayern’s doctors and he is in good hands.”