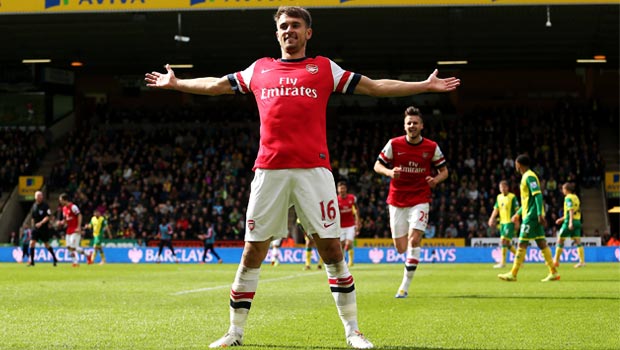 Aaron Ramsey could have sealed his FA Cup final place with a stunning volleyed goal for Arsenal in their 2-0 win over Norwich City on Sunday.

The Wales international midfielder later admitted his first thought when he saw Olivier Giroud’s inviting cross heading his way at Carrow Road was to “have a go at it”.

The shot flew into the top corner of Canaries keeper John Ruddy’s net to set Arsenal on their way to the win which took them to 79 points – level with Chelsea – for a campaign that will finish at Wembley.

“We were on the counter-attack and I was [waiting] for the ball at the far post,” Ramsey told Arsenal.com. “It was a great ball from Oli [Giroud] and I just thought ‘I’ll have a go at it’ and it ended up in the top corner. It was a nice end to a good move.

Ramsey’s spectacular effort was his 15th in all competitions for the Gunners this term, making him the club’s next most prolific goalscorer after Giroud and a virtual certainty to start against Hull City in Saturday’s showpiece event.

“[Everyone] wants to play in finals and we have one now so I’m looking forward to that,” added Ramsey.

“We haven’t won anything for many years now so this would be a great trophy to win and I’m sure that if we do win it, it will make us more hungry to go on, get to more finals and win more trophies.”

Arsenal are 1.42 favourites to win in 90 minutes and lift their first trophy in nine years on Saturday. Hull City are the 6.98 underdogs at Wembley with the draw in 90 minutes priced at 4.30.