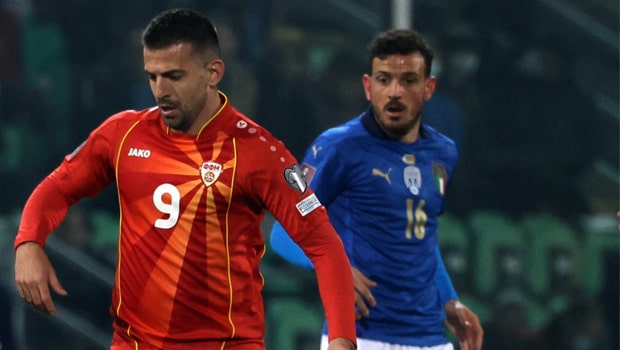 North Macedonia got a smash-and-grab victory on Thursday evening as they beat Italy 1-0 to move into the final playoff spots for the FIFA World Cup in Qatar.

The defending champions of the Euro championship dominated the counter from start to finish, but the Nerazzurri were denied time after time after time by resolute defensive North Macedonia side.

Roberto Mancini’s side had 31 shots on goal but failed to convert any as they slumped to their first-ever loss at home in a FIFA World Cup qualifier.

North Macedonia snatched the match-winner with a stunning goal in the 92nd minute through Aleksandar Trajkovski.

The result means that Italy would be missing out on the FIFA World Cup for the second consecutive tournament after failing to qualify for the 2018 FIFA World Cup in Russia.

Meanwhile, North Macedonia will face Portugal, who defeated Turkey by three goals to one for a chance at the World Cup in Qatar.

The North Macedonians made their debut at the Euro 2020 last year, although they finished bottom of their group that had Ukraine, Austria, and the Netherlands.

Portugal needed a stroke of luck as they pounded Turkey to a 3-1 victory. Porto striker Otavio put the Portuguese ahead in the first half before Liverpool forward Diogo Jota made it 2-0 before halftime.

Burak Yilmaz pulled one back for Turkey in the 65th minute of the game, but also failed to convert a penalty with 6 minutes left of regular time.

Matheus Mendes then sealed the victory for Portugal in the stoppage time. Portugal and North Macedonia both play on the 29th of March

In the other fixtures on Thursday evening, Sweden beat Czech Republic 1-0 after extra time, while Wales moved a step closer to their debut at the World Cup with a 2-1 victory against Austria.