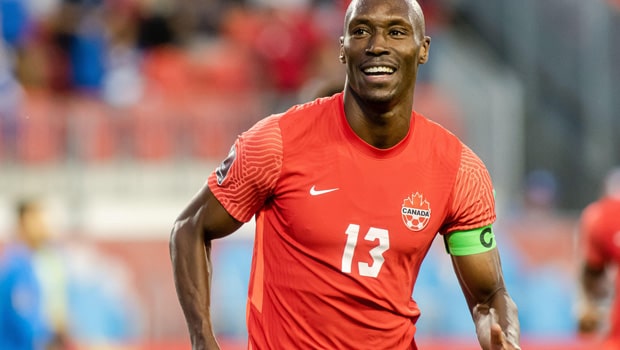 Canada celebrated emphatically Tuesday night following their 2-1 win over Mexico, taking another step towards punching a ticket to the 2022 World Cup in Qatar.

The Canadian national team has not played in a men’s World Cup since 1986, but they are unbeaten so far with four wins, four draws in the CONCACAF qualifying rounds.

“Amazing night,” Atiba Hutchinson of Canada said. “Atmosphere in the stadium was electric and the boys went out there and played our hearts out.”

Tuesday’s match was reportedly the coldest conditions Mexico have ever had to play in. Advantage, Canada.

“He was feeling ill the first few days we got here and really had not eaten for two days,” Herdman said of Larin. “He had a lot of travel and this squad is deep, so we were able to rest him out that first game.”

“To have Cyle as a point man, someone that could create that link between the lines – and you can see how good he is at holding the ball up and bringing other players in – that was a key part of the decision-making,” Herdman added.

There are now six games remaining in this phase of World Cup qualifying. Canada is one point clear of the US, with Panama and Mexico 2 points behind.

“The fans came out for us today and supported us in the cold. We’ve all grown up in this weather, so we’re used to it,” Larin said.

Canada will be back in action vs Honduras on January 27, 2022, before a clash vs the US a few days later. Mexico are back in World Cup qualifying action in late January vs Jamaica, and then Costa Rica.