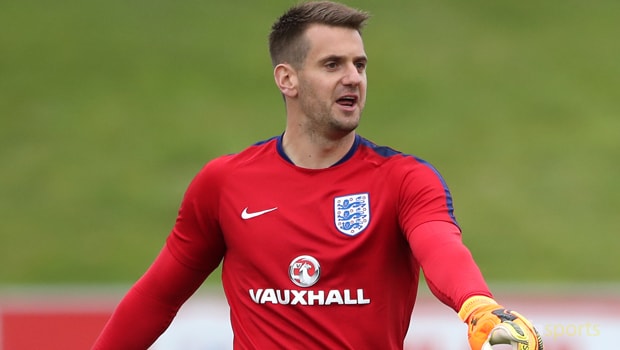 Burnley goalkeeper Tom Heaton says he is still harbouring hopes of making England’s 2018 World Cup squad despite being overlooked for the friendlies against the Netherlands and Italy this month.

Heaton, who arrived at Turf Moor in 2013 and has captained the side since 2015, picked up a shoulder injury during the 1-0 win at home to Crystal Palace in September and has been out of action from that point.

The 31-year-old has been working hard throughout his recovery and now, after almost six months on the sidelines, he is closing in on a return to first-team action ahead of the end of season run in.

However, the shot-stopper is facing a real battle to earn his number one spot back for the Clarets due to the impressive form of Nick Pope, who has been in sensational form in this campaign.

The 25-year-old has deputised for the captain superbly and he has been rewarded for his consistent performances with a place in England’s squad for the two upcoming friendlies.

Jack Butland, Jordan Pickford and Joe Hart have also been included for the two matches and there is a real battle going on in the goalkeeping department ahead of the major event in Russia this summer.

However, Heaton, who appears to have dropped to fifth in the international pecking order, is not losing hope of earning a place in Gareth Southgate’s squad.

“Being back fit is the first marker and then trying to get back into the team is the next step,” he was quoted as saying by the Lancashire Telegraph.

“Beyond that I still have ambitions of making the plane for the World Cup and there is a fair bit of water to go under the bridge yet. “I am working every day with that ambition in mind.”

Burnley return to action on March 31 when they travel to rock-bottom West Brom and the visitors are 2.88 to pick up the win, a draw is priced at 3.20 whilst the Baggies are narrow 2.60 favourites.