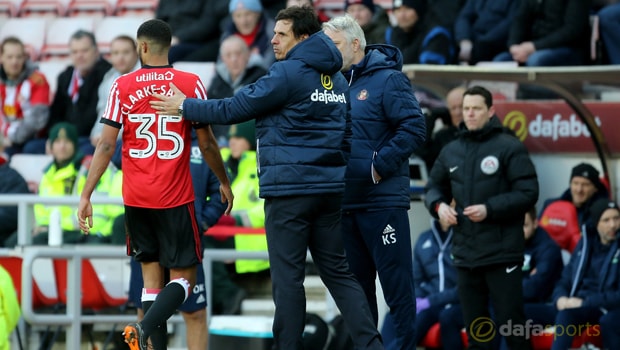 Sunderland manager Chris Coleman says Jake Clarke-Salter showed a lack of experience in Saturday’s 2-0 home loss to Preston North End after picking up his second red card of the season.

Clarke-Salter, who joined the Black Cats on loan from Chelsea in January until the end of the campaign, received a straight red in the 3-3 draw against Middlesbrough at the end of February and was handed a three-match suspension.

The England Under-20 international only returned from his ban in Saturday’s clash against North End at the Stadium of Light but he only lasted 60 minutes after he was shown two yellow cards.

His first caution was for a foul on Tom Barkhuizen in the opening 45 minutes before the second yellow from referee Darren Bond came in the second-half for pulling back Alan Browne.

Clarke-Salter will now be missing for the next two matches against Derby and Sheffield Wednesday and Coleman, who has it all to do to save the rock-bottom club from relegation, admits the defender showed his age against Preston.

“It was inexperience,” he was quoted as saying by the Sunderland Echo.

“He’s been rock solid. Saturday he wasn’t – he was a little bit shaky and I don’t know if that was again because he’s young or if it was the pressure, but he looked a bit short, certainly at the start of the second half.

“He made that mistake and it’s another red card for him. We’ll be missing him again for the foreseeable future.”

The Black Cats, who are five points from safety with eight games remaining, travel to Derby on March 30 and the visitors are massive 7.00 outsiders to pick up the win, a draw is priced at 4.33 whilst the Rams are firm 1.44 favourites.