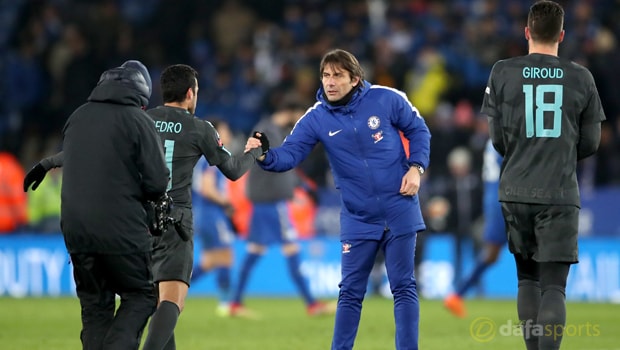 Chelsea manager Antonio Conte says there are no easy games in the FA Cup and his side must be at their best to get the better of Southampton in the semi-finals.

The Blues, who are set to be dethroned as Premier League champions by Manchester City this season, booked their spot in the last-four stage of the tournament after beating Leicester City 2-1 at the King Power Stadium on Sunday afternoon, Alvaro Morata opened the scoring for the visitors in the 42nd minute before Leicester’s Jamie Vardy, who could lead the line for England in the two friendlies against the Netherlands and Italy, forced extra-time with a 76th-minute equaliser.

Spaniard Pedro managed to grab the decisive goal to ensure Conte’s men made it to a second successive FA Cup semi-final and keep the hopes of ending the season with a trophy alive.

Chelsea have been drawn against Southampton, who beat Wigan Athletic 2-0 in Sunday’s earlier quarter-final clash, whilst Manchester United will take on Tottenham in the other last-four tie.

Although it looks like the easier draw on paper, Conte has warned his side against complacency and knows a top performance will be required to get the better of Mark Hughes’ team.

“When you arrive at this point of the tournament, it’s very difficult to consider it an easy game,” he was quoted as saying by BBC Sport.

“There is a semi-final to play before reaching the final. Every game is very difficult, it will be very difficult against Southampton and we must be ready to fight, to reach the final at Wembley for the second time in a row.”

Chelsea, who are 2.63 favourites to win the FA Cup, return to league action on April 1 when hosting Tottenham Hotspur and the Blues are 2.25 favourites to win, a draw is priced at 3.30 whilst Spurs are also a 3.30 chance.