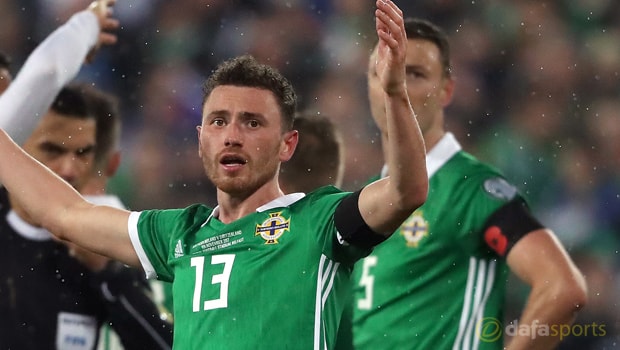 Blackburn midfielder Corry Evans says he is ready to do anything to help Northern Ireland qualify for the World Cup.

Having finished a clear second in their group behind Germany, Michael O’Neill’s men are currently gearing up for their play-off against Switzerland, the first leg of which takes place on Thursday.

The Windsor Park crowd are sure to be in fine voice and the Norn Iron will be confident of claiming victory on a ground where they have built their success in recent years, most notably reaching the last 16 at Euro 2016.

However, the Swiss are a handy outfit, winning nine out of 10 of their qualifiers and have a host of recognised stars throughout their squad who regularly play at the top level.

In contrast, Northern Ireland’s success has been built around team spirit and collective unity and that ethos has given them the chance to reach a first World Cup finals since 1986.

Rovers’ star Evans is clearly raring to go and is confident his side can realise his dream of playing at the global showpiece in Russia in the summer.

“It’s massive,” said the 27-year-old. “It follows on from what we did last summer at the Euros. We’ve kept our consistency and managed to come second in our group, behind Germany.

“That was our main target at the start of the campaign and we’ve managed to achieve it.

“Growing up, you always dream of playing at a World Cup, but you never really think that it would be possible, playing for Northern Ireland.

“They’ve always had disappointments in my lifetime, growing up, so for the whole country and for myself, it would be massive.”

Dafabet are also offering a price boost of 8.50 for O’Neill’s men to triumph 1-0.