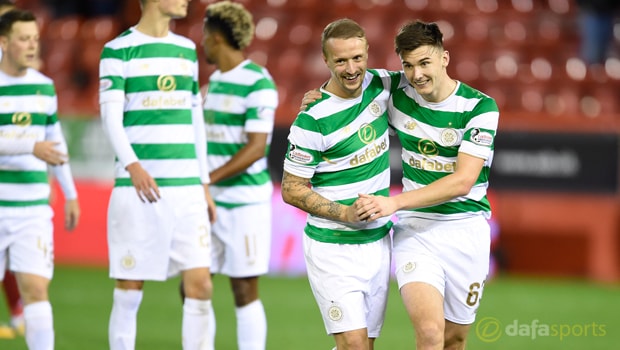 Kieran Tierney says he will continue to keep doing his best for Celtic in order to pay back the faith shown in him by the fans.

The defender has been a regular since making his debut for the Bhoys in April 2015 and has gone on to become a key part of the first team under Brendan Rodgers.

Inevitably the sharks have started to circle, with a number of teams in England thought to be eyeing his signature.

However, at just 20, Tierney accepts he still has plenty to learn before leaving Parkhead.

He also has a clear connection to the club having supported them as a boy and after initially joining as a seven-year-old, signed a new deal until 2023 in the summer.

Tierney is currently away preparing for Scotland’s friendly with the Netherlands but has taken time to assure the Celtic faithful that he remains as committed as ever.

“The Celtic fans know what they mean to me,” he told this week’s Celtic View.

“From the first day I came on at Dundee away, they were brilliant with me and they gave me time to settle in.

In the next season when I really kicked on and played a few games, they were amazing with me.

“They have always supported me and even if I haven’t played as well, they have always given me a chance and backed me. Saying thanks to them is not enough.

That’s why I play the best I can and hopefully reward them with good performances and goals and doing as much I can to help the team.”