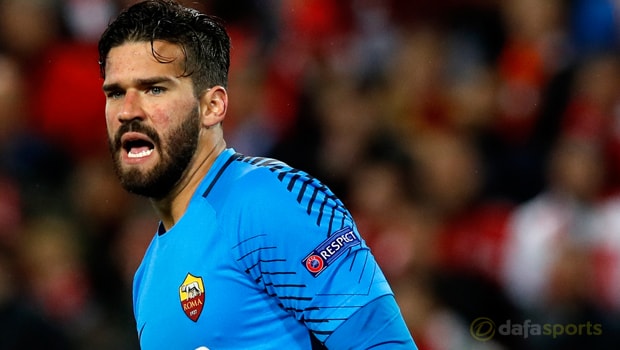 Roma goalkeeper Alisson is ready to wear the number one jersey for Brazil at the 2018 World Cup, according to goalkeeping assistant Rogerio Mala.

The 25-year-old has emerged as one of the best stoppers plying their trade in Europe over the past 12 months, having helped Roma to reach the semi-finals of the Champions League.

Alisson had the joint-second best record for clean sheets in the European competition, while he was also joint-second for shut-outs in Serie A last term.

The stopper, who linked up with Roma in the summer of 2016, is the most capped goalkeeper to be named in Tite’s World Cup squad, with 24 appearances, while Cassio and Ederson of Corinthians and Manchester City respectively have just one cap each.

His performances in 2017-18 looked certain to guarantee him the number one jersey this summer and comments coming out of the pre-tournament training camp would appear to back that up.

Assistant goalkeeping coach Mala believes Alisson has massively improved since making the switch to Europe and insists he is ready to step out on the grandest of stages.

Mala said: ”I was a part of Alisson’s first professional game for Inter, I notice how much he developed.

At Roma the improvement was massive, he knows more about the game, about marking, he knows how to use the left foot, the right foot. He is ready to play for Brazil now.”

Brazil, who are priced at 5.00 to win the World Cup, head to Russia as one of the pre-tournament favourites and will kick off their campaign against Switzerland on June 17 before facing Costa Rica and Serbia in Group E.