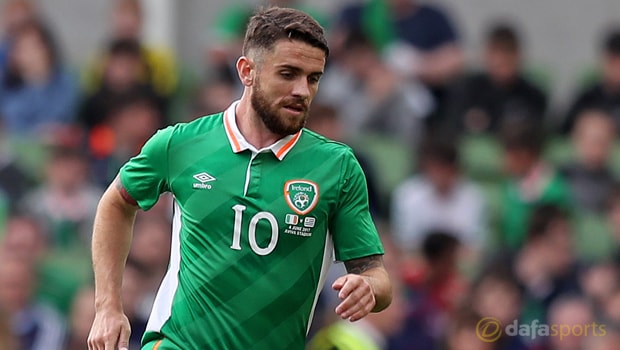 Burnley’s Robbie Brady is chomping at the bit for Sunday’s World Cup qualifier against Austria in Dublin.

The Republic of Ireland international has established himself as one of the key men in Martin O’Neill’s squad and was massively impressive last summer at Euro 2016.

That eventually helped Brady earn a return to the Premier League when he swapped Norwich for Burnley in the January transfer window.

It has been a frustrating time for Brady since, as he started only seven league games for Sean Dyche’s side, and the same number of appearances off the bench.

His high point came when he netted a stunning free-kick against would-be champions Chelsea in a 1-1 draw at Turf Moor.

“This season has been a little bit stop-start for me personally, but every time I’ve come back here [Ireland], I’ve been ready to play,” said Brady.

“I’m fit and I am excited for the game. I love coming back here to play.

“I’ve been in and around the squad for a number of years now and I have been learning every time I’ve come in.

“I feel confident. I enjoy playing on the big stage internationally and I am really looking forward to the game.”

Brady was suspended for Ireland’s scoreless draw with Wales in Dublin in March and he’s raring to make up for lost time now.

“It was a tough one last time. I was in training for the full time the lads were in, so it was a hard one to watch,” he added.

“But it was a decent result and I got to play in the following (friendly) game against Iceland, so it just gave me a bit of a taste for it again.”

Ireland are 2.40 to defeat Austria at the Aviva Stadium on Sunday, the draw is 3.10 while the visitors are 3.20 for the win.