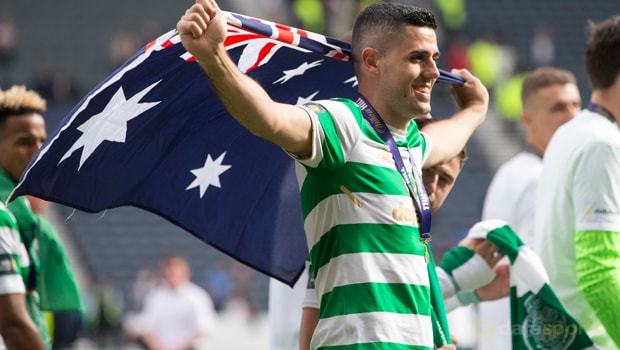 Tom Rogic insists Celtic will not let their standards slip next season and the whole team will continue to do everything they can to bring more success to the club.

Celtic reaffirmed their position as the dominant force in Scottish football this season by completing an unprecedented successive domestic treble with a 2-0 cup final win over Motherwell.

The Bhoys have now won seven straight league titles and the rest of the league, including old firm rivals Rangers, appear to be a long way behind Brendan Rodgers’ side.

Steven Gerrard, who worked under Rodgers at Liverpool, will be in charge of the ‘Gers next season and it is hoped the ex-England captain can close the gap to Celtic.

Having been so dominant in the SPL, it wouldn’t be a surprise to see the Hoops show signs of complacency but Rogic, who recently signed a new contract until 2023, is adamant this won’t happen.

“The manager, Brendan Rodgers, doesn’t let any complacency set in. There’s always hunger and a desire for more – that’s what’s most important,” he was quoted as saying by Celtic Quick News.

“We can’t rest after last season and think we’ve achieved everything. We’ve proven this season, with the trophies that we’ve already won, that it’s relentless, it does continue.

There’s always going to be a next trophy. “I certainly have the hunger and desire in me to win more trophies.”

Rogic’s immediate focus is on Australia’s World Cup campaign and the men from Down Under have been drawn in Group C alongside France, Peru and Denmark.

The Socceroos are 4.20 to qualify from their pool whilst Les Bleus are firm 1.30 favourites to take top spot.