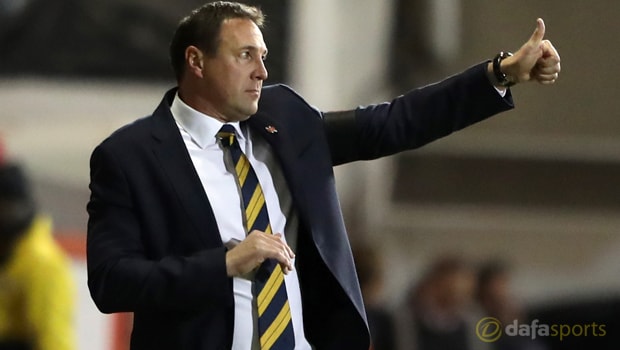 Malky Mackay believe the Scottish national team has a positive future after he oversaw a 1-0 defeat to the Netherlands in Aberdeen.

The hosts created more chances but went down to a first-half strike from Memphis Depay at Pittodrie.

While Scottish FA chief executive Stewart Regan revealed before kick-off that Mackay will not be considered among the candidates to succeed Gordon Strachan, the former Cardiff boss instead reverting to his role as performance director, the interim boss is upbeat on what lies ahead.

There were Scotland debuts for three players from the start – Ryan Jack, Ryan Christie and Callum McGregor – and a fourth in substitute Jason Cummings, while exciting Celtic full-back Kieran Tierney captained the team on the occasion of his ninth full cap at the age of 20.

“I saw a group who were technically competent, athletic,” Mackay said.

“More importantly, I’m loving the bravery of the players, to go and handle the ball.

That’s where we will beat mid-level European teams, with players like that who are athletic but also technically gifted.”

Scotland were denied a World Cup play-off place last month when they failed to beat Slovenia away from home in their final qualifier.

For Mackay, there is a strong core group available to the new manger to build a team and he strongly denies any suggestion that Scotland is lacking the talent to compete at international level.

“I saw boys who can handle the ball, that are tactically doing what I asked them to do, an athletic group who are working hard for each other and want to be here playing for Scotland,” Mackay said.

“People talk about Scottish players not having enough talent, I don’t see that.

“There’s hopefully a blueprint for someone to work with, and a group of players I’ve asked to go and get 50 caps, play like that together, with belief, play like a club side.”