Joe Hart not ‘completely comfortable’ as England No.1 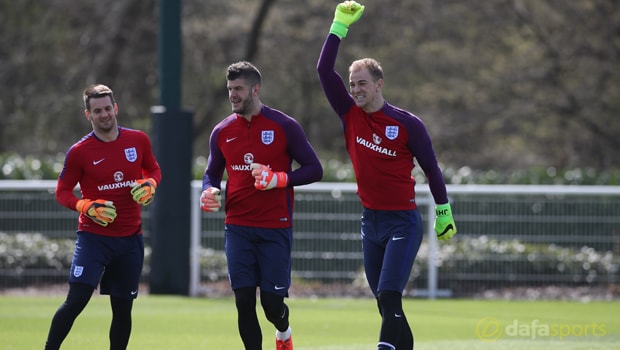 England manager Gareth Southgate says Joe Hart remains his number one goalkeeper, but he should not feel “completely comfortable”.

The Manchester City stopper, who spent last season on loan at Torino after being ostracised by Pep Guardiola, was unable to stop a pair of Leigh Griffiths’ free-kicks on Saturday as England were held to a dramatic 2-2 draw by Scotland at Hampden Park.

Hart will not feature in England’s friendly with France in Paris on Tuesday night, but he will remain first choice, for now, according to his international boss.

When asked who his current number one is, Southgate said: “Joe Hart. In the games we’ve had, he’s been excellent. That said, I don’t want anyone to feel completely comfortable.”

Southgate will give 45 minutes each to Burnley’s Tom Heaton and Stoke City keeper Jack Butland against Les Bleus.

He also has Southampton’s Fraser Forster and Sunderland’s Jordan Pickford on his radar and the Three Lions coach admits that uncertainty over Hart’s own personal future is another aspect he must consider.

But the England boss is adamant his goalkeeper has proved his worth already in the 2018 World Cup qualifying campaign.

“We go into next season and we don’t know who will be playing at which club or who will be in form,” Southgate added.

“In the games we’ve had, Joe has been excellent for us. The two goals he let in on Saturday were the first two he’d let in in this qualifying campaign.

“We owe him the point from Slovenia after one of the best saves I’ve ever seen and his contribution around the group in the time I’ve been manager has been excellent.

“But we want competition for places and it’s good we’ve got other players in all positions pushing for places.” England are 1.08 to win Group F while Slovakia are 8.00.