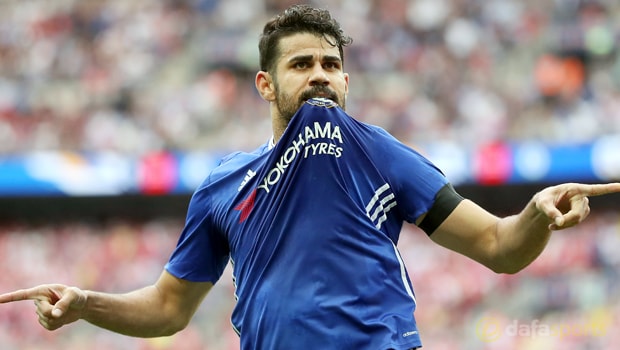 Unsettled Chelsea striker Diego Costa insists he “cannot” move to China this summer, with the 2018 World Cup just a year away.

The Spain international has revealed Blues boss Antonio Conte has told him he isn’t part of his plans at Stamford Bridge next season.

Costa, 28, says he is not short of options regarding potential new clubs, but that moving to the Chinese Super League isn’t among the paths he will consider.

I cannot go to China,” he told the Spanish media after scoring in the 2-1 World Cup qualifying win over Macedonia.

Asked if he would like to fight for his future at Chelsea, Costa insisted it is one battle he feels he cannot now win.

“Things don’t work like that. The fight for a place has to be fair. When there is a fair fight you stay and fight, but if there isn’t then you have to go,” he added.

Costa has once more raised the prospect of a return to previous club Atletico Madrid. Despite the La Liga side remaining under a transfer embargo, the forward says a loan return to Spain is possible.

“I have a contract with Chelsea for two years. If they decide to sell me I will search for the best choice of team for me,” he added.

“Atletico are among those teams. Signing for Atletico wouldn’t mean not playing, I could go (on loan) to some team in Spain, in Italy, in Brazil… wherever I can continue playing.

“Everyone knows that Atletico is a club that I have a lot of love for. Regardless of if I return or not, I’m always going to continue loving them.” Chelsea are 4.33 to retain the Premier League title next season.