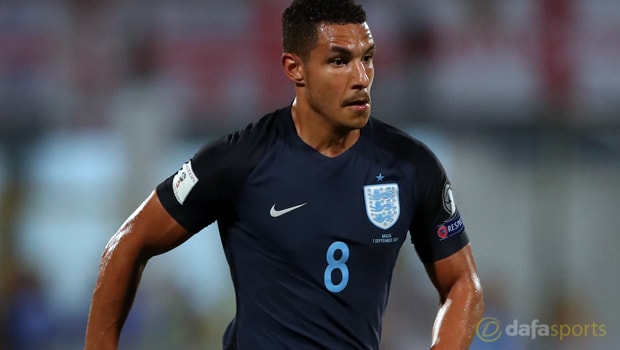 West Brom midfielder Jake Livermore says England are not getting ahead of themselves and the entire squad are focused on taking maximum points from their final two 2018 World Cup qualifiers.

England are currently sitting top of Group F, five points clear of Slovakia in second, and victory in one of the final two qualifiers over the next week will guarantee a place in the major event in Russia next year.

Gareth Southgate’s men are unbeaten from the eight group matches so far, winning six and drawing two, and they will be hoping to extend that record in the clashes against Slovenia (Thursday) and Lithuania (Sunday).

It remains unclear who will start in midfield for the Three Lions but Livermore, who has returned for West Brom recently after being given time off to rest, has been heavily involved for the national team this year.

The 27-year-old was involved in the squad for the matches in June and started the 4-0 win in Malta last month before coming off the bench late on against Slovakia.

Many are already thinking about the World Cup next summer in Russia and how they think England will fair but, with the job not yet done, Livermore insists the only focus right now is on beating their next two opponents.

“[The] bigger picture is that [Russia] is where we want to see ourselves,” he told Sky Sports.

“But we won’t rest on any laurels and we know we have still got two jobs in hand. The focus is very much six points from the next two games, good performances, and working on different things.”

England are 1.33 favourites to win Thursday’s game at Wembley, a draw is priced at 4.75 while Slovenia, who are third in the group and just a point behind Slovakia, are 9.50 outsiders.