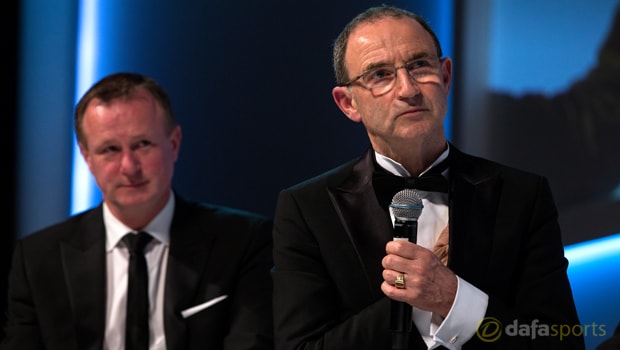 Both Northern Ireland boss Michael O’Neill and Republic of Ireland counterpart Martin O’Neill were content after their sides were paired with Switzerland and Denmark respectively in next month’s World Cup play-offs.

The Irish duo were unseeded for the draw in Zurich and will have been relieved to have avoided Italy from the four seeded teams.

Northern Ireland host Switzerland in their first leg in Belfast while the Republic make the trip to Copenhagen before having home advantage in Dublin.

The other ties saw Italy given a potentially tricky test against Sweden while Croatia and Greece will lock horns for a place in Russia next summer.

The play-off ties take place from November 9-14. Martin O’Neill says the Republic must take encouragement from their strong away record in qualifying ahead of their game in Denmark.

They took seven points from nine in trips to Serbia, Austria and Wales while a 1-1 draw in Bosnia in their previous play-off was the catalyst for Euro 2016 qualification.

“Our away record in this particular competition has been very, very strong, which is great news.

I don’t think the players will fear that [trip to Denmark], but I think they will be very wary,” he said.

“They have players that are playing not only at the top of their form, but playing for big clubs as well, too.”

Northern Ireland have been handed a big opportunity, according to their manager, with Michael O’Neill focused on keeping things tight in the first leg at home.

“Switzerland had a good campaign, but we have a big opportunity to get to Russia,” he said.

“We’ll be prepared for Belfast. We’ve only lost one competitive game there in four years.

“The most important thing is not to concede in the first leg as away goals can prove to be vital.”