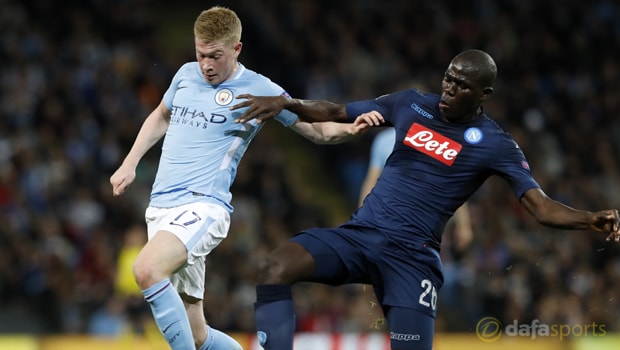 Kevin De Bruyne says he isn’t getting worked up over talks on a new contract at Manchester City.

The Belgian playmaker has been in blistering form lately and was once again a standout performer in the 2-1 Champions League win over Napoli at the Etihad Stadium on Tuesday.

De Bruyne’s agent Patrick De Koster has said he intends to begin discussions with City over improved terms in the coming months, with the player currently tied to the club until 2021.

De Koster has hinted that a pay increase is uppermost on his mind, with De Bruyne rumoured to be earning £115,000 per week on his current deal. But the player isn’t getting worked up over an improved deal.

“My agent went already one time to Txiki (Begiristain, director of football),” he said.

“Talks are coming. I’m patient anyway, I don’t stress. I think I read something in the press, but I have time.”

De Bruyne was outstanding in Saturday’s 7-2 Premier League demolition of Stoke City and was again instrumental as City edged out Napoli as the Serie A side recovered from a slow start to make a real contest of the game.

De Bruyne saw a superb curling shot crash off the underside of the crossbar and come back out as City threatened to run away with the game in the first half.

He is coming in for sustained praise right now, but De Bruyne is only doing what he expects of himself.

“I don’t care [about the plaudits]. I have to do the things that I do. In football you are going to have highs and lows and you have to live in the middle.

I just like to enjoy my football, that’s a big part of me,” he added.

City have won all three Champions League games so far and Pep Guardiola’s team are 7.00 to be crowned champions of Europe this season.