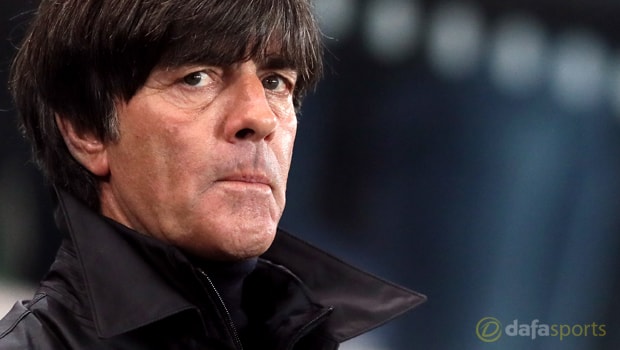 Germany boss Joachim Low has confirmed he plans to use Friday’s friendly against England at Wembley to experiment with his side.

The reigning world champions will kick-start their preparations for next summer’s World Cup in Russia by taking on the Three Lions at the home of English football.

Low’s men won all 10 of their qualifying matches for the World Cup, but they will head into Friday’s fixture without key players such as Jerome Boateng and Thomas Muller, while Toni Kroos is a major doubt for the match due to illness.

Despite the notable absentees, Low insists he is not concerned, as he wants to use the match, and next week’s clash with France, to experiment with his tactics and personnel.

“We want to make a good game, the result is always important,” Low said. “But I also know… I want to experiment already.

It is still a test phase, I do not always want to see the players who play a lot, but also prepare the others for such games.”

One man who is in line to make his debut for Germany against England is Marcel Halstenberg, with Low confirming that he intends to start the RB Leipzig full-back.

“Marcel Halstenberg I plan for the starting eleven, because he has played well in Leipzig over a long period,” revealed Low.

“He is physically strong, good on the ball. If he is with us, then I want to see him as well.”