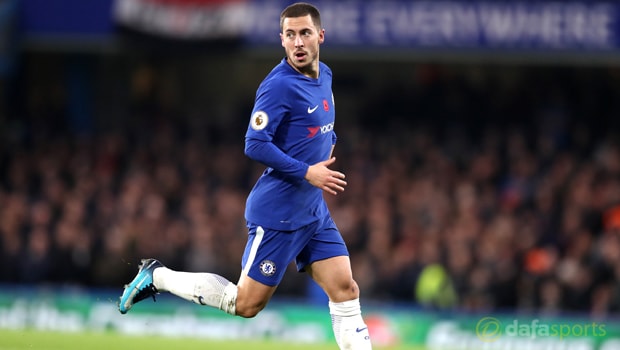 Eden Hazard admits he dreams of playing under Real Madrid manager Zinedine Zidane in the future, although he remains fully committed to Chelsea.

The Belgium international has won four major honours since joining Chelsea from Lille in the summer of 2012, including last season’s Premier League title.

Hazard’s impressive displays at Stamford Bridge have reportedly attracted the attention of La Liga champions Real Madrid in the past and the 26-year-old has now confirmed that he dreams of playing under Los Blancos coach Zidane at some stage in his career.

In an interview with Belgian TV channel RTL, Hazard said: “Everyone knows the respect I have for Zidane as a player, but also as a manager. He was my idol.

“I do not know what will happen in my career in the future. However, for sure, to play under Zidane would be a dream.”

Despite his desire to work under Zidane, Hazard has also reaffirmed his commitment to Chelsea, admitting that he still has goals to achieve in West London.

“I am enjoying life at Chelsea,” he added. “I still have a lot of things to achieve with them. I am focused on playing for Chelsea.”

Hazard’s start to the current season was disrupted by an ankle injury and he has only scored one Premier League goal since returning to action.

The attacking midfielder will be hoping to add to that tally after the international break, with Chelsea set to face West Brom at The Hawthorns on November 18.

Antonio Conte’s men are currently nine points behind leaders Manchester City in the top-flight standings and they are priced at 17.00 to successfully defend their title come the end of the season.