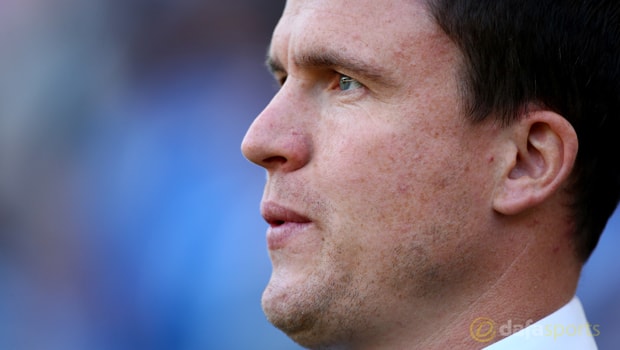 Former Celtic and Scotland central defender Gary Caldwell has expressed his interest in becoming manager of the national team.

Scotland are searching for a new boss after parting ways with Gordon Strachan after failing to make the play-offs for the World Cup in Russia this summer.

Caldwell played under Strachan at Celtic while he has managerial experience at Wigan and Chesterfield since hanging up his boots.

Caldwell earned 55 caps for Scotland and famously scored the only goal in a European Championship qualifying victory over France at Hampden back in 2006.

He feels he can have a positive impact on the Scotland set-up and would like to see the SFA follow Wales’ lead by giving the role to young ex-pros.

“If I didn’t believe I could make an impact then I wouldn’t put myself forward,” Caldwell told the BBC.

“International football in the past used to be that somebody had a career [in management] and it was one of their later jobs.

Nowadays, it’s a job for younger people. A new, fresher approach is going to give you more benefit.”

In the wake of Strachan’s departure, the SFA identified Michael O’Neill as their preferred target but, following an official approach, he elected to remain with Northern Ireland.

Caldwell said playing for Scotland was the “pinnacle” of his playing career and he wants to lead the Tartan Army back to major tournament football.

“With my experience at international level, I can work with these players and bring something different that’s going to help us get to major finals,” he added.

“I have a lot to offer. A young person with different ideas to take the country forward. We need to have a new approach.”