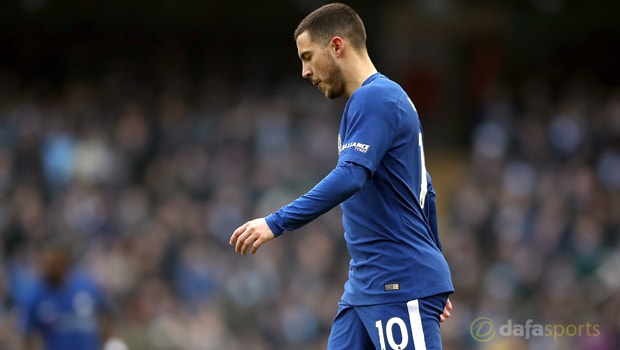 Belgium manager Roberto Martinez insists Eden Hazard won’t be asked to play in a false nine role and has talked up his striking options.

The Chelsea star has been deployed in the false nine position on a number of occasions by Antonio Conte this term with varying results.

Conte doesn’t appear to have complete faith in Alvaro Morata or January arrival Olivier Giroud and he most recently asked Hazard to play that role in the humiliating loss to Manchester City.

City only won 1-0 but it was the overall performance from Chelsea and Hazard that invited criticism from all quarters.

Hazard made it clear after that clash that he was unhappy at being asked to try and fill in with very little support: “We could have played on for three hours, and I [still] wouldn’t touch a ball.”

Martinez, who will be able to experiment with his squad during the upcoming friendlies against Saudi Arabia on Tuesday and Portugal on Saturday, has promised that he won’t ask Hazard to slot in a false nine.

“Lukaku’s form is very good. He was impressive against Liverpool. He is showing maturity. It’s good to see him perform at such a high level,” Martinez said.

“Eden is not a false nine, for me. At Chelsea, that can work with guys like Pedro around him, but with us we still have Romelu, Michy, even Dries [Mertens] can play there.

“I’m not going to put Hazard there.” Belgium head to the 2018 World Cup with high hopes and they can be backed at 13.00 to win the competition outright.