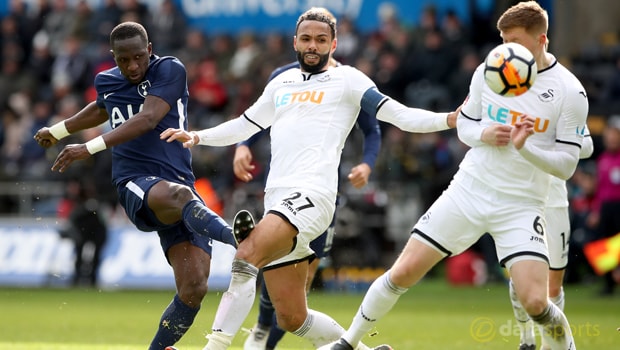 Kyle Bartley insists Swansea can now put their full focus on Premier League survival after being knocked out of the FA Cup over the weekend.

The Welsh outfit may have struggled to pick up results in the league but the FA Cup has provided them with some joy this term.

However, they were sent packing by Tottenham on Saturday with a Christian Eriksen brace and a further strike from Erik Lamela sealing a 3-0 win in the quarter-final clash at the Liberty Stadium.

Saturday’s defeat means that Swansea, who are priced at 5.00 to be relegated, now have just eight games left to play as they attempt to keep their heads above water.

Carlos Carvalhal has helped to improve performances since his appointment in December and he has steered them to 14th, three points above the bottom three.

Bartley has urged the squad to make the most of the international break and feels it is the perfect opportunity to recharge their batteries and come out fighting when they return to action against Manchester United.

“We have to focus on the Premier League now and make sure we get the right number of points to stay up,” Bartley told the club’s official website.

“There are a few tired minds and bodies. The players have played a lot of minutes, so it’s time to recharge.

“But when we’re back in training, it’s a good opportunity to work on a few things and be ready for our next game.

“We’ve got eight cup finals so, hopefully, we can remain confident and go into our next match trying to get three points.”