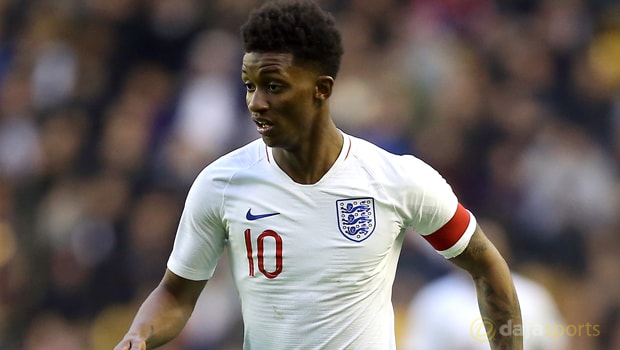 Winger Demarai Gray is hoping to force his way into Gareth Southgate’s England squad by performing consistently with Leicester.

Southgate has offered up opportunities to plenty of young players since replacing Sam Allardyce as England manager in September 2016.

The former England under-21 boss helped to develop some of the country’s brightest young talents and he has attempted to fit them into his plans with the senior side.

Lewis Cook, Tammy Abraham, Alfie Mawson and Dominic Solanke have all recently been called up by Southgate and Gray is hoping he can follow in their footsteps in the not too distant future.

Gray has been a regular with the under-21s and he captained the Young Lions and scored as they beat Romania 2-1 on Saturday.

The 21-year-old insists being overlooked for the most recent squad hasn’t damped his spirits and hopes Southgate will consider him if he continues to perform strongly for the Foxes.

Gray said: “I’m still 21 but my experience is that nothing is too soon, anything is round the corner. “I’ve just got to knuckle down and do what I do and see what comes.

“Of course at my age I’ve got my personal targets and aspirations and it’s good to see Lewis now, and obviously Tammy and Dom went to the last camp with the first team.

“I wouldn’t really call (not getting called up) a disappointment, it happens as you grow up from a young age.

“So for me it was kind of one where players have moved up, but maybe I wasn’t ready yet or maybe (Southgate) didn’t think it was my time.

“But it shows the England manager has got faith in young players and if you’re doing well when you come and perform here and at your clubs then everyone’s got a chance.

“So for me personally I want to be up there and keep working hard and knuckling down. I believe in myself and believe my time will come.”

England will take on Tunisia, Panama and Belgium in Group G at the 2018 World Cup and they are priced at 2.15 to top the group in Russia.