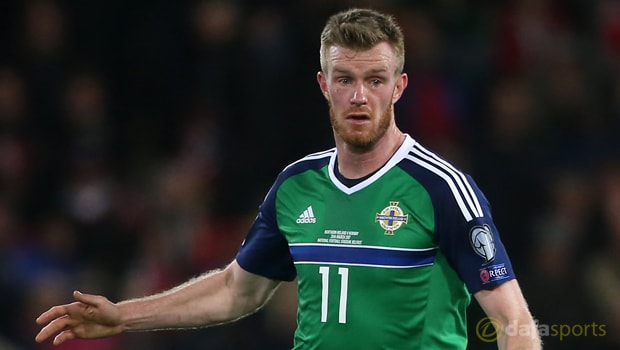 Chris Brunt feels Northern Ireland have a chance to lay to rest some ghosts when they face Azerbaijan in Baku this weekend.

Michael O’Neill’s side are second behind world champions Germany in Group C as they look to build on last summer’s Euro 2016 appearance by reaching the World Cup Finals for the first time in 32 years in Russia next summer.

An embarrassing 2-0 defeat towards the end of the 2014 World Cup qualification campaign in Baku was one of the low points of O’Neill’s tenure with Northern Ireland so far.

They’ve come a long way since, however, something they illustrated when easing to a 4-0 victory over Azerbaijan in Belfast in November.

West Brom midfielder Brunt says that game will have shown Saturday’s opponents that they are a changed outfit.

“They will know a lot more about us now,” Brunt said.

“The last time we played in Baku we lost 2-0 and they probably didn’t expect what we were going to do to them in November.

I’d say they would be pretty wary of crosses and set pieces.

“We pretty much took them apart in Belfast with our deliveries into the box and the physicality of it.

I’m sure they will look at that.” Northern Ireland have three wins and a draw from five games in their qualification group so far, with Germany the only side to breach their defence during that run.

Brunt knows that chasing home the world champions in Group F and heading for a potential play-off is the most likely route to Russia and he is eager to take it – after injury forced him to watch Euro 2016 as a spectator.

“Not getting to play in the summer was disappointing,” he said.

“It’s part and parcel of football and there’s not much you can do about it.

“It will take a miracle to stop Germany winning the group, but we have a realistic chance of a play-off spot and it would be great to qualify for a World Cup.

It will be tough and I think the next couple of games will go a long way to determining that.”