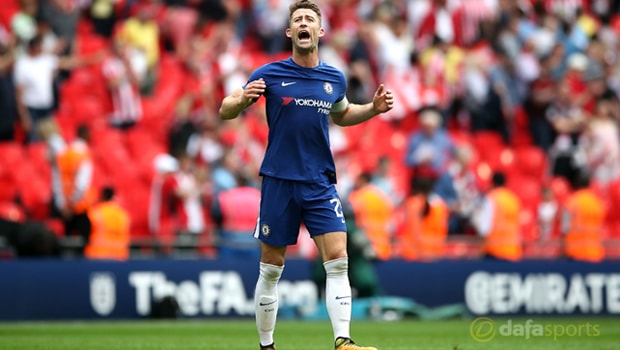 Chelsea captain Gary Cahill is remaining hopeful of earning a place in England’s 2018 World Cup squad after returning to form for the Blues over the past few weeks.

Cahill found himself on the bench for the recently dethroned Premier League champions for around two months this season and there were serious questions being asked about his long-term future at Stamford Bridge.

However, the 32-year-old defender was reinstalled into the starting XI at the start of this month and helped steer his side to the FA Cup final when beating Southampton 2-0 in the semi-finals on Sunday.

Barring the cup run, it has been a disappointing season for Chelsea and the club, who will reportedly part ways with manager Antonio Conte in the summer, look unlikely to finish in the top four.

Cahill’s World Cup hopes took a blow during that time on the bench for the Blues and he was left out of Gareth Southgate’s squad for the friendlies against the Netherlands and Italy.

The former Bolton Wanderers star is facing a battle to earn a spot on the plane to Russia this summer but believes there is every chance he will be selected for the Three Lions.

“Everything is a possibility when you’re playing, hence why I’m happy to be back out there,” Cahill said.

“Let’s see what happens at the end of the season. We’re in the (FA Cup) final now, the World Cup is coming. Let’s wait and see.”

Cahill is expected to start away at relegation-haunted Swansea City on Saturday and Conte’s men are 1.50 favourites to come away with the win. The draw is priced at 4.20 whilst the Swans are 7.00 outsiders.