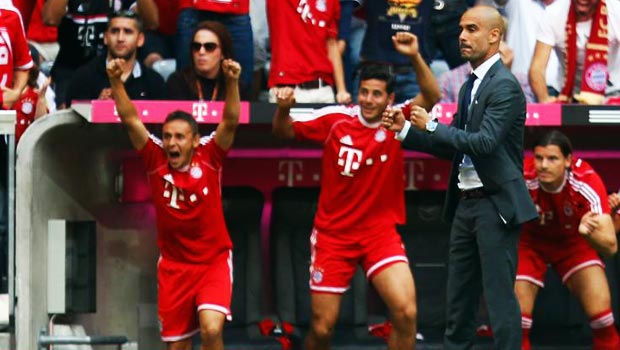 Pep Guardiola will demand more from his Bayern Munich players next season despite guiding them to a fourth trophy of the current campaign on Saturday.

Bayern beat Borussia Dortmund 2-0 to lift the DFB-Pokal title in Berlin, their fourth trophy in Guardiola’s first season in charge.

The DFB-Pokal trophy adds to Guardiola’s collection at Bayern Munich, having already secured the Bundesliga title in record time, the UEFA Super Cup and the FIFA Club World Cup.

The Spaniard took over from Jupp Heynckes last summer on the back of the Bavarian outfit’s Champions League win and despite his instant success, has come under criticism after his side failed to defend their European title.

They were beaten 5-0 on aggregate by Real Madrid in the semi-final of the tournament and their success in Europe may be what Guardiola has in mind when setting new targets for 2014-15.

Speaking after victory over Dortmund, Guardiola told Sky: “It was a difficult year for me because I don’t really speak that good German, but I think four titles in a year is great.

“But we’ve got to move on and improve certain things.”

The former Barcelona coach may also be boosted next season by keeping hold of Arjen Robben. The Dutch winger has reportedly been identified by Louis van Gaal as a primary target when he takes over as Manchester United manager.

But Guardiola appears reluctant to sell another of his key players, with top scorer Mario Mandzukic expected to leave after being left out of the squad for Saturday’s final.

“He was probably our most important forward this year, together with Mandzukic.

“I’m happy with him and enjoy working with him.”