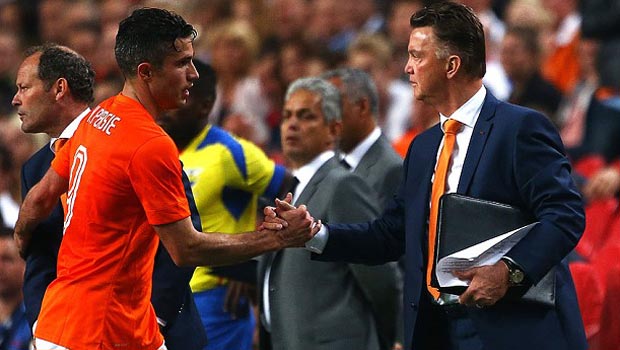 Robin van Persie looks set to be handed the Manchester United captaincy in the Louis van Gaal era as his current Netherlands coach described him as “fantastic” and having “the same morals and philosophy”.

The 62-year-old van Gaal is currently preparing his Dutch squad for next month’s World Cup in Brazil and he will have van Persie wearing the captain’s armband and leading out the troops in South America.

However, with the vastly-experienced coach waiting to be officially unveiled as David Moyes’ successor at Old Trafford, van Gaal’s comments on van Persie will give United fans an insight into the part the 30-year-old striker will more than likely play at the club from the start of next season.

After watching van Persie’s goal in Saturday’s 1-1 with Ecuador on Saturday, van Gaal said: “He is my captain, he’s my top scorer in the one-and-a-half years that he has played under me.

“He became the all-time top scorer of the Dutch team, he plays superb football and even coming back from a bad injury he scores a fantastic, unbelievable goal. I was happy with his performance, but he is also a fantastic captain.

“I think you always make a player captain when you have the same morals and philosophy. Not only about football and tactics and what is happening on the pitch but about life.

“I think that’s very important and I believe that van Persie and van Gaal share the same philosophy.”

The former Arsenal striker, who virtually missed the final two months of the season with a knee injury, will almost certainly take the captain’s armband from Nemanja Vidic, who is leaving United to join FC Internazionale Milano.

Van Persie’s Netherlands, who finished runners up to Spain in South Africa in 2010, are 26.00 to lift the World Cup this summer.