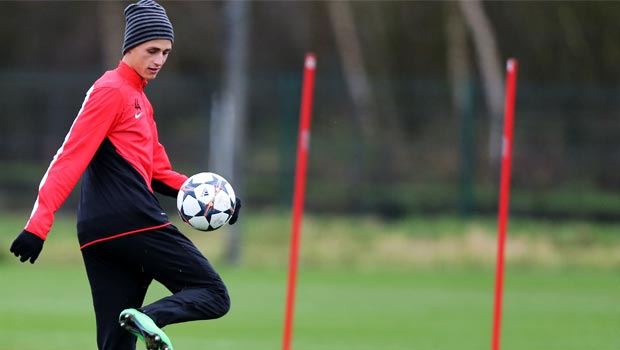 Manchester United star Adnan Januzaj is set to be named in Belgium’s 30-man World Cup preparation squad and has a chance of making the final cut, according to Red Devils coach Marc Wilmots.

The Brussels-born attacker, who could have chosen to represent Kosovo, Albania, Turkey, Serbia, Croatia and even England, told Wilmots last week that he’d finally made up his mind to play his international football for Belgium.

There had been claims in the media that Januzaj must have received some guarantee that he’d be in the Red Devils’ World Cup squad but both the player’s agent Wilmots denied that was the case.

Wilmots has now told Le Soir that the United starlet will be part of the Belgium squad of 30 players to be named on May 13 and that Januzaj will get his chance to impress in their training sessions and friendly matches ahead of the World Cup.

“He can certainly join our preparations and he will be able to prove himself,” said Wilmots.

The 19-year-old will have two chances to impress in training camps scheduled to take place in Genk at the end of May and in Sweden at the start of June.

The Red Devils face Luxembourg in their first warm-up at the Cristal Arena in Genk before their friendly against the Swedes on June 1 with Januzaj expected to make his international debut in those matches.

“I would like to see him on a daily basis, and I need him in the pre-selection,” Wilmots told Le Soir.

“His profile is very interesting because of the absence of [injured] Christian Benteke. His versatility is an asset.”

Playing at the World Cup for Belgium would be a big step for Januzaj who hasn’t played international football at any youth level.

Manchester United snapped him up from Anderlecht’s youth system aged 16 and he made the first-team breakthrough in October, scoring twice on his Premier League debut at Sunderland.