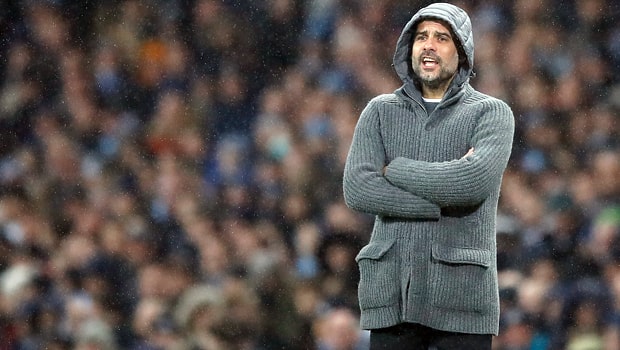 Manchester City boss Pep Guardiola dismissed any notion of good fortune playing a hand in their 3-1 win over Watford at the Etihad Stadium.

City’s latest win piled the pressure on title rivals Liverpool but it only came about following a fortuitous breakthrough goal at the start of the second half.

Watford had frustrated the league leaders for 45 minutes only to see Raheem Sterling open the scoring after Daryl Janmaat’s attempted clearance deflected off him and looped away into the net.

Sterling was in an offside position when Sergio Aguero attempted to feed the ball towards him and, while the flag was raised initially, referee Paul Tierney overturned the offside call after consulting his assistant.

It was a decision that caused plenty of discussion, with Watford feeling aggrieved. Sterling would go on to complete a hat-trick before the hour-mark, while Watford responded with a strike from sub Gerard Deulofeu.

Guardiola wasn’t having any suggestion that his side relied on good fortune to get the win as he pointed out the difference in approach from Javi Gracia’s side compared to their recent 5-0 drubbing against Liverpool at Anfield.

“It is the end part of the season so every game is important. For three months we wait to be top of the league and now we have to try and win our games,” said the City boss.

“I am sorry if [the first goal] is offside but we deserve to win. Against Liverpool, [Watford] tried to press but here they have 11 players in the box. There was no space, but we found it and we created a lot.

“[It] is not luck. Here there are many people working to make last season’s level. If they can do that it will be down to hard work and not luck.”

City are now 1.29 to retain their Premier League crown, with Liverpool trading at 3.50.