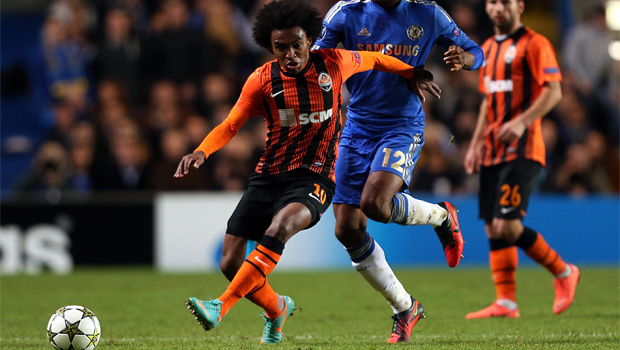 New Chelsea signing Willian admitted he faces a fight to earn his place in the first-team at Chelsea but he is looking to earn the “trust of the manager and the fans”.

The Brazilian forward make the move to west London from Russian club Anzhi Makhachkala for a fee thought to be £25.5million at the end of last month.

Willian was poised to move to rivals Tottenham until Chelsea made a late bid and the 25-year-old signed a five-year-deal and will wear the number 22 shirt at Stamford Bridge.

Jose Mourinho’s changes to the side will see the former Anzhi star have plenty of competition for a place in the team, with Eden Hazard, Oscar, Juan Mata, Ramires, Andre Schurrle and Kevin De Bruyne all looking to start.

Willian spent just eight months in Russia, making only 15 appearances, but he is desperate to prove his worth to Chelsea, which could then lead to a chance with Brazil in the World Cup.

“I know that I haven’t secured my spot here,” he told ‘Globo Esporte’. “I’ll do my best to achieve that place, while respecting the other players. I’ll train, play and do my best to get the trust of the manager and of the fans.”

He added: “There is no doubt English football is very big, with huge visibility. I hope that helps me to be called up for the national team – but of course that depends on me.

“I’ll have to play and prove I deserve that spot. I first have to become a regular starter [with Chelsea], then play well and be called up [by Brazil]. This is my goal.”