Wilfried Bony feeling ‘blessed’ to be at Manchester City 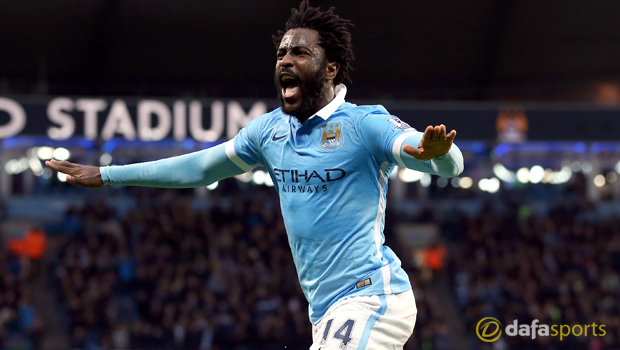 Wilfried Bony says he has no desire to leave Manchester City just a year after he joined the club in a big-money move.

Bony left Swansea last January in a £28m deal that brought him to the Etihad Stadium.

After returning from the African Cup of Nations, he saw his opportunities limited at City as they relinquished their Premier League title to Chelsea.

Injuries to Sergio Aguero have afforded Bony more playing time this season and he has managed to score eight goals in 23 appearances for Manuel Pellegrini’s team.

However, since the Argentine striker returned to fitness last month, Bony has once more found himself settling for a cameo role off the substitutes’ bench.

Media speculation has linked Bony with a surprise return to Swansea but the player himself says he has no regrets about joining Manchester City and that he feels ‘blessed’ to be at such a huge club.

“I’m happy at the club, all this speculation is not true,” he said. “I have a contract so I’m happy and I think I’m at one of the top clubs in the United Kingdom.”

City are one point off top spot in the Premier League while they have a Champions League last-16 tie with Dynamo Kiev to look forward to next month.

Before that, they face a Capital One Cup semi-final second leg against Everton at the Etihad Stadium next week and then a trip to Aston Villa in the FA Cup.

With four fronts still to fight on, Bony clearly feels he will get his chance to shine at the club.

“I have no regrets about joining Man City,” he added. “We play in the Champions League and we’re one of the top clubs in the world. I’m happy here and I can just say I’m blessed.”

City are 5.50 to win the FA Cup this season while they are 2.75 to secure the Capital One Cup.