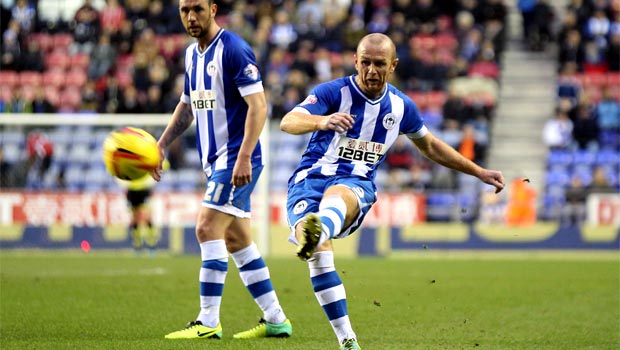 Having gone out of Europe at the hands of Maribor on Thursday, Wigan Athletic next face local rivals Bolton on Sunday.

Wigan are enduring a poor run at present, having their last six matches, but with the European dream now over, they can concentrate on arresting the slide and moving up the Championship table.

To be fair, they were without striker Grant Holt against Maribor and had to play with 10 men after Chris McCann was sent off for a second yellow card.

Up to that point, new boss Uwe Rosler was pleased with what he saw as his side stroked the ball around confidently, offering plenty of encouragement for the future as he bids to return to the passing game that was put in place by Roberto Martinez before Owen Coyle took over.

Midfielder James McArthur is looking forward to life under Rosler for whom Thursday’s defeat was his first official game in charge.

“He wants us to pass the ball. We’re trying to get back that style that we had before where we were getting it down and passing it sharp. In spells we did that and we can only grow from this,” McArthur said.

The Scot too knows the importance of Sunday’s game, and added: “It is the biggest game of the season, especially because we haven’t been picking up wins.

“It’s a derby and we need to try to turn the season round by getting three points and try to start climbing that table.”

Having been ineligible for Thursday’s Europa League tie, both Will Keane and Ivan Ramis are available for selection, while opposition boss Dougie Freedman has no new injury worries.

The last meeting between the sides in February saw McArthur score the deciding goal in a 2-1 victory for Latics and the last six meetings have all been low-scoring affairs.